The Memorial gets underway Thursday at Muirfield Village Golf Club in Dublin. CBS will televise the final two rounds starting at 2:30 p.m.

As the legend goes, Nicklaus wanted his event to honor past champions and contributors to the golf world, hence the name The Memorial.

The event started in 1976 on the Nicklaus-designed course. Players and fans are encouraged to wear yellow (gold) to honor the Golden Bear on Sunday.

Tiger Woods was 23 years old when he won the Memorial in 1999. Tiger owns the most Memorial wins with five. He’s not in the field for this weekend.

Here’s everything you need to know for the Memorial, including the favorites and we picked the six greatest moments from the tournament (one for each of Jack Nicklaus’ green jackets).

Top golfers to watch at the 2022 Memorial Tournament

BetMGM has Jon Rahm (+1000) as the favorite heading into the Memorial. Ohio sports betting is coming by the end of the year.

Rahm won the Memorial in 2020 and was leading the event by six strokes when he had to pull out after the third round due to a positive COVID test. His putter has been off and on, but Rahm won the Mexico Open a month ago and is the defending US Open champ.

McIlroy has been in the top 10 five times this season and won the CJ Cup. He’s 14th in the current FedEx Cup standings.

Patrick Cantlay, a California native, shot a 275 over four days to win the Memorial in 2021 (but remember, Rahm had to pull out). Cantlay won the Tour Championship in 2021.

Ohio’s favorite for the 2022 Memorial Tournament

Justin Lower got into the Memorial on a sponsor’s exemption. The Akron native won the Ohio Division II high school state championship in 2006 and won the 2012 and 2015 Ohio Open.

This will be his first start at the Memorial Tournament.

The first Memorial tournament had one of the craziest finishes when Roger Maltbie and Hale Irwin had to go to a four-hole playoff.

On the third hole, Maltbie hit his approach shot to the green badly. Miraculously, the ball struck a rebar pole holding up a gallery rope and bounced back on the green.

“It has to be some sort of destiny,” Maltbie said at the time.

Maltbie saved par, then made a birdie on 18 to win the playoff. Memorial officials presented Maltbie with the rebar poll after the tournament. Maltbie won five PGA Tour events and is a beloved NBC golf announcer. 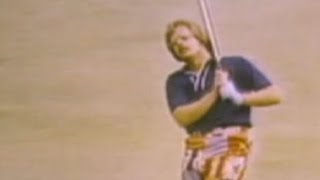 The 1993 Memorial came down to a two-man battle between Paul Azinger and Payne Stewart.

Azinger’s 204-yard shot found the greenside bunker on 18, while Stewart was eight feet away from the hole.

What followed was one of the best shots ever. Azinger used his 56-degree sand wedge to get up over the ledge, land on the fringe and roll into the cup.

Azinger’s moment of joy is shown every year at this time. Rattled, Stewart missed the potential tying putt. Azinger called it ‘the bunker shot of my life.’ 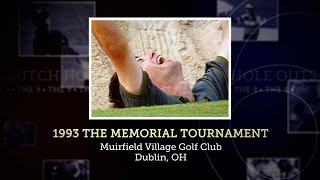 This was Peak Tiger.

It was another year the weather was bad at the Memorial Tournament, forcing players to finish the third round and final round on Sunday. Azinger had a two-shot lead when play was halted Saturday.

Sunday was all Tiger Woods. He buried an eagle putt at the par-5 fifth hole on his way to a final round 66. He became the first person to win the Memorial Tournament three years in a row, and it was his fifth win in six starts that year.

Perhaps the most improbable winner in the history of the Memorial Tournament is Bart Bryant.

He was 42 in 2005 and had been to Q-School (Qualifying School) five times. He had won the Valero Open in Texas in 2004 but was the definition of a tour journeyman.

The final round became a battle between Bryant and Fred Couples, with the lead changing hands eight times. Facing a downhill 14-footer on 18 for the win, Bryant drilled it. Couples’ chip to tie went past the cup.

Bryant would win The Tour Championship that year by six shots over Tiger Woods, but never win another PGA Tour event.

When Justin Rose finished fourth at age 17 in the 1998 British Open, he was hailed as the sport’s next superstar.

It took some time. Rose turned pro and then missed 22 straight cuts on tour. He was 29 when he arrived in Ohio in 2010 and while the wind made everyone’s score blow up on Sunday, Rose was steady with a bogey-free 66 to record his first win on American soil.

Jack Nicklaus himself called it one of the greatest shots he’d seen in competition.

Tiger Woods drained an unlikely 50-foot flop shot (hit softly so it settles or ‘flops’ on the green) on 16 from a tough lie to spark him to his fifth Memorial title.

Woods was down two strokes at the time when he knocked an 8-iron over the green on the par-3. He started the day four shots off the lead but roared back to win by two strokes.

The win was Woods’s 73rd all-time on tour tying him with Nicklaus for second-most all time. Woods now has 82 tour wins. 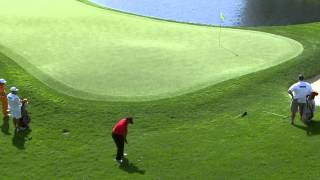