Dayton is best known as the first stop on the road to the Final Four, as March Madness traditionally begins with the First Four at the University of Dayton Arena.

However, the Dayton Flyers are a legitimately talented D1 basketball team that has appeared in 18 NCAA Tournaments, making it as far as the National Championship game in 1967 and the Elite Eight twice, most recently in 2014.

Dayton consistently puts a competitive team on the floor, draws a ton of eyeballs during college basketball season and is a lock to be a local betting favorite with legal and regulated sports betting in Ohio. See below for the latest Dayton Flyers odds, betting trends and more.

Here’s where you can find the latest Dayton Flyers lines and odds. This includes Dayton moneylines, spreads and totals for upcoming games. Plus, you’ll find the current odds on Dayton winning the NCAA Tournament and season-long player props, like Dayton’s best players winning the Naismith College Player of the Year. Click on a bet to go to the sportsbook that posted it, where you can register an account, claim a bonus and place that bet.

You can bet on March Madness futures throughout the year, from the offseason through the NCAA Tournament. This includes bets like the Dayton Flyers to win the National Championship, make the Final Four, win the Atlantic 10 Conference Tournament or make the NCAA Tournament. The sports odds change alongside the team’s perceived chances of accomplishing any of these goals, and you lock the odds on your bets when you place them.

Dayton’s biggest rivals are local Ohio teams like Xavier and Miami (Ohio) and Catholic schools, including Marquette, DePaul and Notre Dame. However, Dayton won’t play any of these teams in the 2020-21 season.

Instead, Dayton’s biggest rivals this season will be the other teams in the Atlantic 10 Conference. Learn more about betting on college basketball games at top OH sportsbooks, such as DraftKings Sportsbook Ohio, FanDuel Sportsbook Ohio and Caesars Sportsbook in Ohio.

Why is Dayton the host of the First Four?

The University of Dayton Arena has been the host of the NCAA Tournament’s First Four every year since 2011, except for 2020 when there was no NCAA Tournament and 2021 when the entire tournament was held at a single location.

Why Dayton? Dayton is within 600 miles of more than half of the U.S. population. Plus, it has an international airport, and Interstates 70 and 75 pass through. It’s in the Eastern Time Zone, making it perfect for TV broadcasts. Finally, the arena has a history of selling out basketball games.

Dayton also feels like a small town, fitting the NCAA’s image for the First Four. Plus, Dayton and local basketball fans have proven they’ll continue to support the NCAA First Four. The Flyers are in the top 35 in attendance nationally every year, and life in the city during March revolves around the First Four.

Dayton basketball players in the NBA

Led by Naismith College Player of the Year, consensus first-team All-American and John R. Wooden Award winner Obi Toppin, the 2019-20 Dayton Flyers went 29–2 and won the Atlantic 10 regular season, going undefeated in the conference. Ranked third in the country in most polls, the Flyers were a favorite to win the Atlantic 10 Tournament and grab a No. 1 seed heading into the NCAA Tournament before both were canceled due to COVID-19.

Toppin has since left for the NBA, taking what may have been the Flyers’ best shot at March Madness glory with him. Toppin is currently the only former Dayton player in the NBA, drafted No. 8 overall by the New York Knicks in 2020.

Down the line, Kostas Antetokounmpo (brother of Giannis, of course) did spend a couple of years on the bench in the NBA after being drafted in 2018. He now plays in Europe. Historically, Jim Paxson may be the greatest NBA player to come out of Dayton. He was a first-round draft choice in 1979, 12th overall, played for Portland and Boston from 1979 to 1990 and was a two-time All-Star.

How much are Dayton basketball tickets?

The average price of a ticket for a basketball game at the University of Dayton Arena is $41. Tickets are available online here.

The Dayton Flyers had a magical March Madness run to the Elite Eight in 2014, immortalized in the video below. Granted, the best-ever Dayton team was the 2019-20 squad that finished 29-2 in the regular season. Since that team was deprived of a chance to compete in the NCAA Tournament when it was canceled, the Flyers’ Elite Eight run in 2014 remains the team’s best March Madness moment to date. 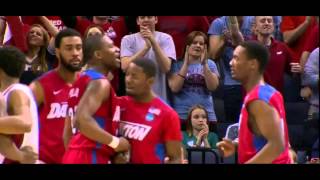