The Columbus Crew are a Major League Soccer success story. The franchise is one of the 10 MLS charter clubs that began play in 1996. They played at the first soccer stadium actually built for an MLS team for more than 20 years and just moved into the brand new Lower.com Field in 2021.

Over the years, the Crew have won two MLS Cup titles, including the 2020 MLS Cup. Columbus has also won three Supporters’ Shields, awarded to the team with the best regular-season record in the league.

Check the latest Columbus Crew game lines here. That means three-way moneylines, spreads and totals for upcoming Crew games. Click on any betting line to go to the sportsbook, sign up for an account, claim your bonus and place a bet.

The latest Columbus Crew futures odds, including the Columbus Crew odds to win the MLS Cup this season. Click on any of the futures bets here to go to the sportsbook, sign up for an account, claim your bonus and place a bet.

The latest Columbus Crew props odds for the team’s best players. Click on any of the odds listed here to go to the sportsbook, sign up for an account, claim your bonus and place a bet.

What is the Columbus Crew moneyline?

These outcomes are a Home Team Win, Away Team Win or Draw. A typical Columbus Crew moneyline will look like this at FanDuel Ohio sportsbook:

What is the Columbus Crew spread?

MLS spread betting is like spread betting in most other sports, which means there’s a line set by oddsmakers factored into the final score to determine the betting winner. Soccer is a generally low-scoring game, so MLS spreads are set low, at one goal or half a goal.

For example, at DraftKings sportsbook Ohio, you might bet on the Columbus Crew at -1 (-115) at home against the Chicago Fire. You’ll win this bet if Columbus wins by two or more and get paid $100, plus your bet back, for every $115 you bet. You’ll lose the bet if Columbus loses or if the game ends in a tie, and you’ll push if Columbus wins by a single goal. You might also bet on Chicago at +1 (+115). You’ll win this bet if Chicago wins and push if they lose by just a single goal. Wins pay $115, plus your bet back, for every $100 bet.

MLS totals betting is about forecasting the final combined score in a game. You’re betting on whether it lands over or under different lines posted by sportsbooks. These soccer betting lines generally range from 0.5 goals to 3.5 goals. You can bet the under on 0.5 goals at +750 for the Columbus-Chicago game.

Betting on MLS games extends beyond just moneylines, spreads and totals. You can bet on all kinds of team and player props. This may include a specific Columbus Crew player scoring or the team scoring first, last or not at all. You can bet on the number of red and yellow cards issued or corners awarded. Plus, you can place bets on the exact score, or the exact number of goals and even whether the total goals will be an odd or an even number.

Soccer betting also includes the Double Chance, where you bet on two of the three-way moneyline betting outcomes at the same time. Plus, there’s the Tie No Bet, which essentially turns the moneyline into two-way betting, refunding all bets if the game ends in a draw.

Here’s a quick look at five of the best Columbus Crew players in franchise history:

How to watch or listen to Columbus Crew games

All Crew games air on Bally Sports Ohio TV or its secondary channel Bally Sports Great Lakes. Jordan Angeli is the color analyst on the broadcast and the first woman broadcaster in Crew history.

Here’s a look at two of the franchise’s signature moments: 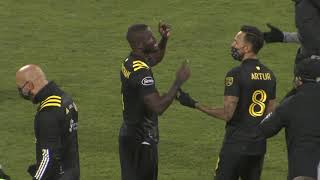